When I was pregnant, I did some research and decided when Sophia was old enough to eat baby food, I would try to make it for her.  Then, when I found out my job was only going to be part-time, I had no excuse; I’ll definitely have time to make it!!  Piece. of. cake!

After having a child, I realized there is hardly ever any time to do that, anything!  But, that still didn’t stop me from making homemade baby food.

I would be lying if I said I made it all.

Thank goodness for my mother in law; she is the greatest!!  She made 95% of Sophia’s baby food.  From purees to apple sauce muffins, she did it all!!  Thank you, Peg <3

Sophia started cereal at four months and then began purees around six months.

She started with veggies then went-on to fruits.  I took the advice of giving her the “sugary” fruits/veggies last so she can develop a liking for the “bitter” tasting ones first.


Between my MIL and I, we made the following purees:
peas, butternut squash, applesauce, pears, peaches, mangos, pineapple, carrots, sweet potatoes, eggplant, zucchini, chicken, turkey, beef, cauliflower and broccoli.  I think that’s all of them.


Don’t make the mistake I did!  I thought when you introduced a “new food” for the first four days, anytime she ate, she ate “that food.”  So, for lunch, snack, and dinner Sophia ate peas!!  Poor Sophia!!  LOL!!

I think I only did that for about a week or so.. But hey, this is my first time!!  I’m still learning!!

From 10 months on, Sophia has been eating whatever I cook for dinner. Thanks to her getting her toofas in early, she can chow down on basically anything.  I still have some purees incase she isn’t “feelin'” what we’re having for dinner.  I can say she isn’t too picky- takes right after her daddy <3

Here are two products I could not live without when making Sophia’s food: Baby Bullet Kit: The baby bullet is great to have when you first start to make your baby’s food.  It comes with everything you need to make your baby’s first foods from 6 months – one year.  One feature I absolutely love that is included in the kit (pictured above) is the “dial a date” storage containers.  You can set the date of when you made the food so you can keep track whether or not to use it.  This helped me keep a bit of my sanity!  Also, the Baby Bullet came with a cookbook. This helped me out greatly with when certain foods should be introduced. *A food processor works just as well as a Baby Bullet!  I just liked everything that came with the kit.

Ice Cube Trays: Instead of having a bunch of baby food storage containers take up space in our freezer, we made Sophia’s food and froze them in ice cube trays.  I think this is the most convenient; just pop them out of the trays, put them in freezer bags and wahh la!!
Two quick pointers:

Momtastics Wholesome Homemade Baby Food is an amazing resource for anything baby food related.  I found a bunch of great recipes ideas and learned the proper way to store food.  I highly recommend this site! 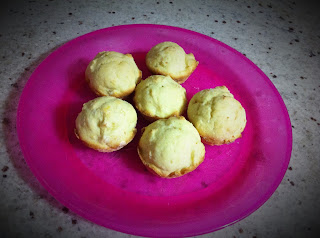 Ingredients:
2 oz (1/4 cup) softened butter2 oz (1/4 cup) sugar1 egg (if your baby is under 1 year, you may prefer to use these egg substitutes)3 oz (3/8 cup) applesauce4 oz (1 cup) flour2 tsp baking powderpinch cinnamon
Do this:Preheat the oven to 200 deg C, 390 deg F.Cream the butter and sugar in a bowl until light.Beat in the egg until fluffy.Beat in the applesauce.Stir the dry ingredients together and add them to the bowl, blending just enough to moisten the dry ingredients.Spoon into greased muffin tins and bake for around 15 mins, until golden.

I’m always looking for more recipes to try!  Feel free to comment and share yours!  Sophia appreciates it 😉 Pass it on! Let’s make this Monday a bit brigh

My girl feeling the feels💕🍩 ✨ #sparkle

About last night... We had our Mexican inspired d

Here’s a scene from our trip to @target as Sophi

Couldn’t help but feel the feels with the beauti

Wait a minute.. You mean to tell me I can sit nex

This weekend was a first. For the last few years

Goosebumps.. Will have a lot of them today knowin

My eyes...my eyes are in some serious pain. Neve

Happy First day of school from our future daycare

My heart is bursting for this boy❤️ He’s ba

As per your request... My latest affordable shopp

“You’ll be amazed at what you attract after yo

Felt a bit of a chill while grilling dinner and gr

Welcoming the weekend with some vanilla ice cream

I felt like paparazzi trying to capture the absolu